You have permission to edit this article.
Edit
4H Virtual Fair 2020
Celebrating the local county fair! Rylee Luebbers gets to the corner as he beats a pair of Eagle defenders to the edge. He was responsible for three touchdowns and 142 yards of total offense in the Lions’ win over Vienna Friday night. 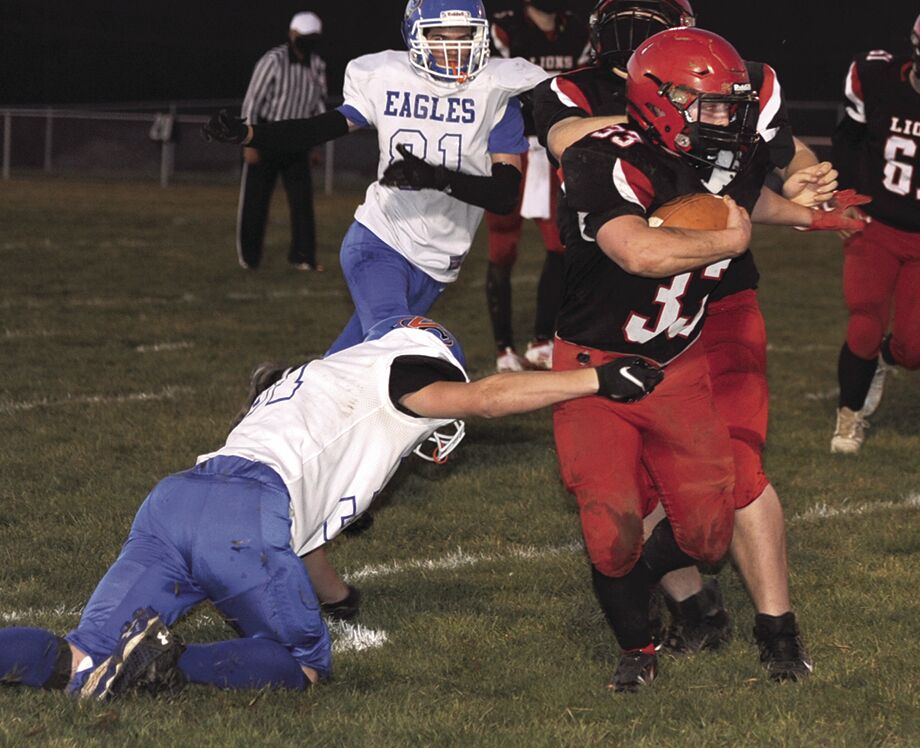 Devin Meyer runs through an arm tackle during the Lions’ victory over Vienna Friday night.

Rylee Luebbers gets to the corner as he beats a pair of Eagle defenders to the edge. He was responsible for three touchdowns and 142 yards of total offense in the Lions’ win over Vienna Friday night.

Devin Meyer runs through an arm tackle during the Lions’ victory over Vienna Friday night.

With Edwards County standout Ryan St. Ledger not available to play against Vienna Friday night, someone needed to step up for the Grid Lion offense.

As it turned out, two players stepped up.

Rylee Luebbers and Devin Meyer combined for 216 rushing yards and three touchdowns on the ground, with Luebbers adding another score through the air as well, as the Lions bounced back from a slow start offensively to defeat the Eagles by double figures. Edwards County defeated Vienna 28–14, propelling first year Head Coach Russ Gerlach’s Lions to a 2–0 start for the first time in recent memory.

The ECHS defense and special teams started the game off well for the Lions, slowing down the Eagle run game and blocking a punt on Vienna’s opening drive. Offensively, however, the Lions gave the ball back to Vienna less than two minutes later.

Vienna would score on their first play after taking the ball back, in an odd-developing play which saw an Eagle ball carrier appear to be down near the line of scrimmage, but no whistle blown. The Vienna running back emerged from the pile, running 71 yards into the end zone as the remaining 21 players on the field appeared to believe the play to be over.

This put the Lions in an early 6–0 deficit with seven minutes and 31 seconds remaining in the game’s opening quarter.

Edwards County put together a long drive in rebuttal to the Eagle touchdown, but a fumble on the Vienna 17 yard line put the ball back into Eagle hands. The Lion defense would force another punt.

Luebbers put the ECHS boys on the scoreboard with a little more than eight minutes left to play in the half, running seven yards for the score. The Lions would make good on the two-point conversion attempt which followed, giving them an 8–6 advantage.

They would not trail again in the contest.

The Lions recovered a pooched kickoff which the Eagles failed to field. The next play saw ECHS quarterback Kade St. Ledger throw the ball deep down the field in an effort to get the ball to receiver Dylan Rhodes, but the ball was intercepted.

Vienna would not be able to do anything with this second chance opportunity, however, as the Lion defense forced a turnover on downs. This would keep the Edwards County lead at 8–6 heading into halftime.

Midway through the third quarter, St. Ledger found Luebbers on a fade route all alone on fourth and long for a 25-yard touchdown. The Lions converted the resultant two-point attempt once again, giving them a 16–6 edge over Vienna.

The Grid Lions again played strong defense on the next Eagle drive, forcing another turnover on downs.

The Lion offense again threatened to score, but a fumble on the Vienna three yard line resulted in another turnover. Yet again, however, the ECHS defense forced a turnover on downs on the following Vienna possession.

With just under nine minutes remaining in the game, Meyer scored his first career touchdown, taking a direct snap five yards to carry Vienna defenders with him across the goal line. A failed conversion attempt kept the Lions lead at 22–6.

The Lions successfully executed an onside kick following the score, recovering the ball on the Vienna 45 yard line. St. Ledger again found himself intercepted on the very next play, however, with the Eagles taking possession on the Edwards County 12 yard line.

This time Vienna would find their way into the end zone on a seven yard run, making good on a two-point conversion attempt to inch closer to Edwards County as they trailed 22–14.

Vienna attempted an onside kick of their own, but Luebbers recovered for the Lions. He would also go on to score on the next Edwards County drive, rushing 25 yards for the score on fourth and five with two minutes and 26 seconds remaining in the contest.

Another failed conversion attempt maintained the Lion advantage at 28–14.

Vienna attempted to throw the ball down the field in the final minutes of play, leading to some near-interceptions before Rhodes would put the game away by picking off an Eagle offering.

Defensively, Meyer and Luebbers combined for most tackles for the Lions with 4.5 each, while Rhodes had half a tackle, a pass deflection and an interception to his name. Gus Baker added three tackles, a sack and a tackle for loss to the Lion effort, with St. Ledger managing two tackles and a pass deflected. Levi Emmons also contributed two tackles in the victory.

Corbin Andrini and Patrick Dilley came away with 1.5 tackles apiece as well.